I have been meaning to read more Edwin Morgan for a while now. Anytime I remember to look for his books in stores there are none to be had, but luckily he keeps appearing unexpectedly, as he always only has for me. Before I moved to San Francisco two years ago, I had a garage sale, with all the usual things you find in an “I’m-about-to-move!” garage sale: childhood toys and old clothes, furniture… And of course books, ones I had shopped around several used stores in San Diego (including the wonderful Adams Avenue Book Store, my favorite in San Diego) but which nobody wanted.

Which I’m glad of, actually. Sitting there while strangers pawed through my old stuff, I thumbed through those rejected books and picked up this: 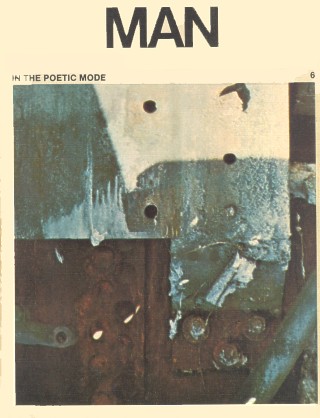 Well, it was Vol. 5, not 6. “Man in the X Mode” was a classroom series from the mid-70s: “Man in the Dramatic Mode,” “Man in the Fictional Mode,” etc., with increasing levels of complexity from Volume 1 through Volume 6. The “Poetic Mode,” the only ‘Mode’ I’ve seen, has poems interspersed with images—paintings, photos, collages—but what sets this series apart it its marvelous selection. It is eclectic and celebratory in its choices, from Richard Wilbur’s strict rhymes to Reinhard Döhl’s concrete poems.

I have no idea where the volume I have came from, but I fell in love with the series and have been keeping an eye out for them since, though I’ve only found one more.  One of the reasons I love them is because they introduced me to Edwin Morgan (among under-appreciated and obscure others, like May Swenson and Jean-Joseph Rabearivelo). That morning several of the poems I marked for further investigation turned out to be, though in seemingly opposing styles, all by the same author.

I check shelves for his work pretty regularly and never find anything, but he was prolific and high-profile enough, at least in Scotland and England, that you may have come across him many times in many forms and, like I did, not recognized him as one poet. The range of his work is astounding, from sonnets to not-quite-concrete poems to limericks to freeverse to charming gibberish to experimentally iterative.

Morgan was also a well-known and respected translator from as many languages as he had styles, and what occasioned this post, to let everyone know the pleasures of Edwin Morgan, was coming—unexpectedly, of course, in the comments to a post on LanguageHat—across this, his rendition of a recently discovered complete poem of Sappho’s (only the fourth complete one, it has an interesting story in its own right):

Sappho and the Weight of Years

Girls, be good to these spirits of music and poetry
that breast your threshold with their scented gifts.
Lift the lyre, clear and sweet, they leave with you.

As for me, this body is now so arthritic
I cannot play, hardly even hold the instrument.
Can you believe my white hair was once black?

And oh, the soul grows heavy with the body.
Complaining knee-joints creak at every move.
To think I danced as delicate as a deer!

Some gloomy poems came from these thoughts:
useless: we are all born to lose life,
and what is worse, girls, to lose youth.

The legend of the goddess of the dawn
I’m sure you know: how rosy Eos
madly in love with gorgeous young Tithonus

swept him like booty to her hiding-place
but then forgot he would grow old and grey
while she in despair pursued her immortal way.

One of these days I’ll find a volume of his work on a shelf somewhere, and it will be wholly unexpected, like everything is with Morgan.

(More information and samples are available from EdwinMorgan.com, and this blog post has another smattering from the gamut of his styles.)